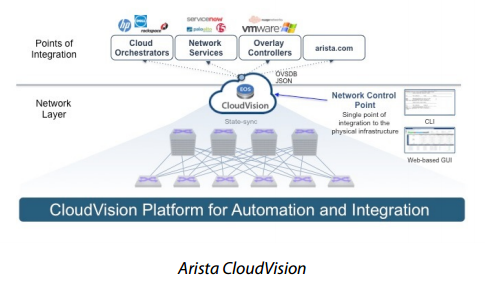 Arista has pioneered the networking industry with its software defined cloud networking approach, built on the programmable interfaces, publish-subscribe state separation, resilient fault containment, and self-healing attributes of Arista EOS®. CloudVision extends the same architectural approach of EOS across the network for state, provisioning, change management, and visibility. This enables enterprises to move to cloud-class automation without needing any significant internal development. CloudVision is a network-wide approach for workload orchestration and workflow automation delivering a turnkey solution for cloud networking.

The CloudVision platform is a software suite of services that deliver further operational simplification of the Arista physical infrastructure. The CloudVision services fall into three primary functional areas:

With CloudVision, the physical network continues to operate in a familiar model, following the Universal Cloud Network design principles. The well-known control and data plane features continue to be distributed in each physical device. The same command-line (CLI) and API’s are available to the operator. However, CloudVision enhances the traditional operational model with a central instance of virtual EOS that provides an aggregate view of the physical network. This instance provides both a centralized network database, as well as a web-based portal for network-wide automation and visibility.

Cloud Automation for Everyone
Arista understands the growing need for organizations to adopt more widely automated, programmable, and comprehensive management solutions for the network to keep pace with the rapid adoption rate of complex virtualized data centers and high performance 10/40/100 GbE switching environments.

EOS as a Network-Wide Service
CloudVision is built on the same open standards-based and fully programmable Arista EOS. With CloudVision, the EOS state database model is expanded to a networkwide view with NetDB, now able to maintain the state of the entire network in a common database. This central database abstracts the physical network to enable network-wide automation and visibility.

Complements the Cloud
CloudVision is Arista’s platform for physical network integration with third party services. This includes integration with cloud orchestration platforms such as OpenStack, network overlay controllers such as VMware NSX™ , and network services solutions such as Palo Alto Networks, F5, or ServiceNow. Using open, standards-based APIs such as OVSDB and JSON, CloudVision helps to both simplify and scale this integration through an abstracted network view and a single point of integration. This approach allows customers to deploy a best-of-breed cloud networking solution.

Controller Agnostic Approach. A simplified approach for integration with third party overlay controllers is essential in today’s combined physical and virtual world. CloudVision supports a variety of overlay and orchestration controllers, including VMware NSX™, OpenStack, and any other OVSDBbased controllers. This gives customers the flexibility of choice in their orchestration and overlay approach.

Topology Abstraction. The details of the physical network topology include platform, configuration, and protocol nuances across the topology. Third party solutions often need additional software integration work to account for these details. And even subtle changes to the topology can affect the controller operation. CloudVision is an abstraction layer that simplifies the integration with controllers and third party tools, allowing them to ignore the nuanced details of the network and then focus on the things they do best.

Hardware and Software Abstraction. Does the northbound controller integrate with the new hardware platform? Or new switching feature? Which software version is certified with a northbound controller? A third party controller can be certified to work against CloudVision and not be as dependent on the hardware or software versions running in the actual network. So the controller interoperability and operations remain the same even after the network is upgraded.

Macro-Segmentation™ Services (MSS). CloudVision is a central point for services integration to the physical network through the MSS framework. With MSS, network services like security policy can be dynamically instantiated in the network in an open approach and without changing operational or administrative security models.

Scaling the Controller. Improved scale for network topology changes in a virtual environment. Typically, an OVSDB-based controller would have to talk to each hardware VTEP, which could be 100’s of switches each with a separate OVSDB connection. CloudVision aggregates the network to a single point providing a single OVSDB connection to the controller. This helps scale the performance of the controller and lets the network handle re-convergence events via EOS.

Automated Provisioning. For initial deployments through ongoing configuration changes, CloudVision reduces the time to deploy network changes and the likelihood of humaninduced errors. Simple to use ‘Configlets’ provide config modularity and consistent re-use across devices. A GUI-based ZTP server is included for automated deployments as well as zero touch device replacement and a ConfigBuilder provides a flexible method for customizing configurations.

Smart System Upgrade (SSU) with a Network-Wide Scope. Leverage underlying EOS features like SSU maintenance mode and leaf SSU combined into an automated workflow for performing software image upgrades across a group of devices. This automation helps to simplify the common and manual operational task of a software upgrade, ultimately reducing the time needed for a maintenance window.

Network Rollback. On occasion, the operator might need to quickly restore the network to a previously known state. A manual, device by device rollback can be time-consuming and error prone. CloudVision addresses this with an automated framework to rollback the network configuration and software versions to a previous point in time.

Open API Integration. RESTful APIs for all CloudVision functionality that can be used for scripting as well as integration with other management platforms and workflow tools.

News Resources via Arista.com. Security vulnerability alerts, end of sale and end of life notices as well as field notices can be delivered from arista.com through the portal allowing customers a single resource for reviewing Arista notifications.

The following describes the requirements for the hardware on which CloudVision is installed.